Play my phone through stereo

Hi everyone is there a way to play my samsung phone through my stereo on my 2009 mx5. it says bose on the front, i only want to play music any thing else would be a bonus, i know i could change the head but looking for a simple way if poss. Steve

On my mk2.5, Ive been using a bluetooth transmitter, basically you connect your phone to the device and set a fm radio frequency to transmit to. then tune in on your car radio and you will have basically a bluetooth stereo! got a link to one on eBay, they’re pretty cheap.

The FM transmitter effectively prevents multiple unsafe problems. Enable you to know your car battery state easily. This item is a car Bluetooth kit, which including FM transmitter and two USB charging ports.

Hi Dawid, thanks for the quick reply, does this work ok ?. i’m not very techy and don’t want to be setting this up everytime i get in the car, is it set it once and you are good to go from then on. This looks like just what i require unless somebody comes up with a better idea. i thought i saw some sort off dongle that may be good but do not know if it will fit in the back off my stereo. any help would be great. Steve

I’ve used one (not the one in the link, got given it by a mate but very similar), and haven’t had any problems with it for the last 3 years or so and audio quality is decent. I set the frequency of the transmitter to a frequency that isn’t used by any radio stations in my area because it can cause some interference, and have saved that frequency to one of the presets on the radio. that was i can seamlessly switch between radio station and the phone audio. Most even are capable of handsfree calling with an answer/decline button on them but i have never used it personally. a stereo upgrade will give you better results, as the biggest issue is interference (which isn’t that bad anyway), but for the money you can’t go wrong in my opinion! 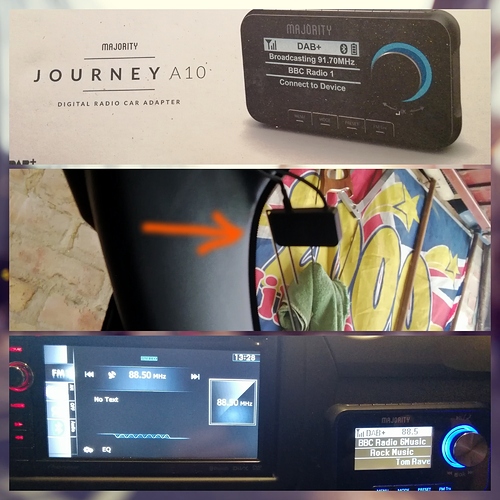 I connected my Huawei phone to the stereo easily enough using Bluetooth and then decided to upgrade to digital radio as well. The unit I bought and fitted didn’t connect using Bluetooth but the included instructions told me how to make a VHF connection instead. This works fine so no problems.

I am not sure why the phone worked and the other didn’t. My MX is a 61 plate 2 ltr Sport Tech. 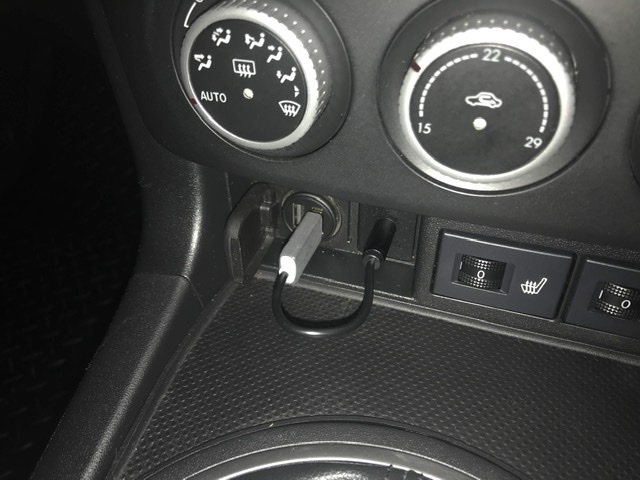 Edit: It looks a bit rough in the pic because I’ve added heat shrink sleeving becuase the white LED was so bright.

Hi MX5 Pilot, thanks for the recommendation, now that looks great, I have just received one I bought of off Ebay (cheap) to see how it performs ( so far so good) but wish I had seen this first, still contemplating getting a new stereo head just the same, anyway the one I have bought seems to work OK so will see how it goes, thanks again, Steve

I’m not a fan of the FM transmitter, they pickup too much interference.
There’s an adaptor you can buy which allows you to fit an AUX cable, they cost only a few pounds. 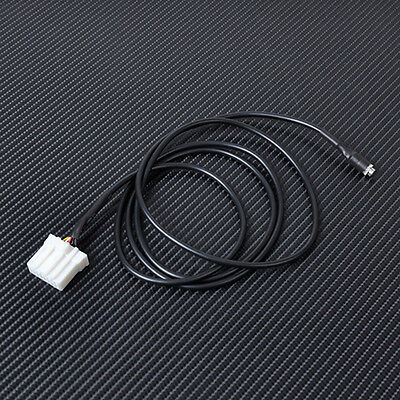 This cable plugs in to where the CD multichanger would go.

Connected to this, I have a dedicated bluetooth receiver.
Not exactly this one, but something similar. 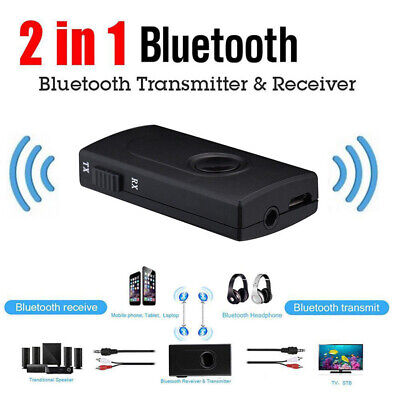 Bluetooth Compliance: Bluetooth V4.2, A2DP and AVRCP. 2-in-1 Bluetooth Transmitter Receiver with aptX & aptX Low Latency. supports the latest Bluetooth V4.2. Can be paired to two Bluetooth Headphones or speakers, and streams audio to both of them...

The connection message on my receiver is comical, it creases me up every time i hear it.
Goes along the line

I added a simpler analogue only solution (but it’s a bit fragile) a couple of years ago, mini-jack plug and lead to the 16 pin Accessory socket on the back of the Mazda radio. It is just accessible if you take out the glove-box and have strong fingers to manipulate the plug. I needed to remove the existing bits for an old style iPod connection. 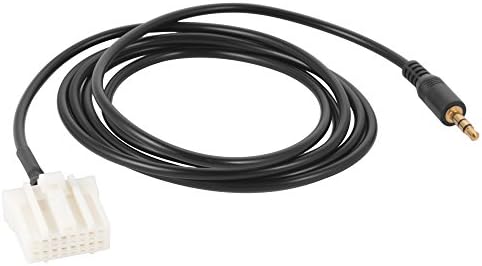 I also use one of those FM thingies with an SDHC mini card in it - no batteries needed, but only 3* for lack of useful controls compared with a normal player and poor sound because of picking up other cars! But a lot better than nothing. 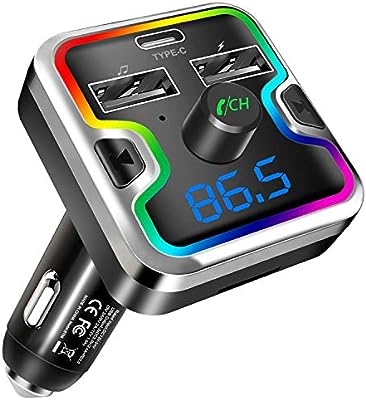 Hi Keat63, so have i got this right?, i buy both these and the small wiring harness plugs into the back off my radio [non bose] and then into the bluetooth box , then set it up and there is no interference at all. i have just purchased a fm transmitter which works OK but not sure about interference has yet has i have not been very far , I will definitely be buying if the fm thingy is c–p, THANKS for the lubberly info. Steve

Thanks Richard, for the info. i think i will try Keat63 idea first after i have tried the fm transmitter i have just bought, thanks again. Steve

Basically yes, with absolutely no interference.

The cable connects directly in the back of the radio where the CD multichanger would go (unless you have a multi changer of course.)
On the radio controls, press the media button and now all audio is routed through that cable.

On the end of that cable I have a bluetooth receiver (actually its a bluetooth DAC), but a plain BT receiver should do the same thing, provided it has an AUX out.

I did somethuing with an old Nexus 7, so that’s how I ended up with a DAC rather than just a receiver.
Just ensure that you have some method to power up the BT receiver.

Mine is connected via the internal fuse box, and is powered up with the ignition.
Within a few seconds of starting the car, my phone latches on to the DAC and away we go.

I can no longer find the exact DAC i have, i bought it on eBay about 3 years ago, cost me no more than about £10.00

Hi Keat63 again, thanks for even more info, that looks like just want I want, so ordered it from the dreaded e-bay, so looks like it’s coming from China although it said London, I will let you know how I get on once it arrives, thanks again. Steve

Hi. Just bought my first MX5 - Mk3 63 reg. This thread refers to the Firefly Chat, which seems to be a very easy way to provide both hands-free phone and the ability to play music on my phone, all through the existing car music/radio system. I’m not very technical and my recent cars have these capabilities built in (the MX-5 is an indulgence), so is it as easy as it looks? The MX5 doesn’t have a USB port so I’ll need to use the cigarette lighter/USB but there are plenty of pics in Amazon and elsewhere that confirm this is fine.

I’m going to assume that the USB on this thing is there purely to provide power.
The aux cable would still need to be connected to your head unit, so unless you have aux already, you’ll need to purchase an aux adaptor.
Plus a USB power supply to power it up.

How good it is for handsfree calling, I couldn’t comment.
If hands free is important to you, then i see no reason why this shouldn’t work.

If you want to hide it, consider a 12v to 5v step down (buck) converter with built-in usb port.
This would allow you to install it under the dash out of the way.

If hands free is not important, i’d suggest that you could do this cheaper.

Hi Stan, Keat63, i am going down this route but i have been waiting for my bluetooth 4-2 receiver to arrive, i already have the wiring loom that goes into the back off my non bose head which came about 3 days after i ordered both items, i will let you know how it goes when i receive the item. it should be here soon has i ordered it about a month ago [said it was in stock in UK] but i think its coming from China . see my previous discussion on this subject, Steve Reed

Hi Stan , Keat63 again, i tried the fm receiver first which worked ok if you just use it for everything but if you then go onto another channel you get interference. Steve Reed

BT to Aux all the way every day.
Had my setup for about 4 maybe 5 years.

I have a 12v to 5v buck converter, hooked up the internal fuse box.
This is activated upon ignition switch on.
It’s fitted inside a small plastic case which I picked up from work.
https://www.beal.org.uk/electrical-products/connector-box/electrical-connection-box.html

The buck converter has 4 x USB charging points, one of which is powering a bluethooth DAC, which in turn is connected to the aux cable.