Wanted: Cheap project MX5 Mk1/Mk2 for me to work on and drive over summer

I’m looking for a Mk1/Mk2 Manual for sale within a budget of £1000. I know its a bit of a big ask but im looking for something that’s a bit worn down to have as a first project car that once brought up to regulation will be a fun weekend run around for me whilst im at university and further on down the line a very capable track car I intend to take to circuits around the world, setting lap times; record or not, I just want to leave my mark on the world in this wonderful car. The mileage of the car is not a big concern of mine and the more miles, the more travelled and history the car has in my personal opinion.

Thank you for your time!

It’s difficult to find a good one for that price. The problem is MX-5s rust badly and once worth £1k are likely to be very rusty, maybe MoT fail and unsafe.
Watch the ‘Lights up, lights down’ YouTube and watch the rust repairs.
Just make sure you check the MoT history well and get under with a torch.

Hate to say it but the following alternatives might be less rusty:

rust isnt an issue for me. I dont mind doing rust repairs since it gives me an excuse to learn how to do them and also perfect my welding and such and on the topic of the alternatives, since im 18 and a new driver, insurance costs on all of those quote-wise was too much considering extra costs i would need to be paying such as MOT and Road Tax. Although i would probably be spending a fair bit on rust repairs, in my opinion its a small price to pay to own your dream car rather than buying a more expensive alternative

The dream car can turn into a nightmare. An increasingly high percentage of Mk1s now at the sub-£1000 mark are probably approaching basket cases, where the rust is more than sheet metal needing welding, bt more expensive parts needing full replacement. Less rusty cars can be found, but that’s mostly cars being sold by people who don’t understand the value; the last place to find those owners is an Owners Club forum.

If the dream is based on driving manners, consider extending the search to include the Mk2 (NB). Plenty of roadworthy examples for under £1000 (sub £1000 Mk1s likely to be MOT-less, and will need to be trailered, which might add significant cost). Plenty of those won’t be basket cases. Yes, they need rear sills, rear arches, front chassis rails, but you are less likely to find rotten floor pans, bulkheads, A-pillers. They drive just like a Mk1 (under the panels, they are basically identifical). Early Mk2s in a solid colour I can see getting to a classic status.

Surprised a base MGF costs more to insure than a MX5. Most of the cheap surviving Mk1s worth looking at are JDM imports, and once you declare that, the insurance cost doubles. You can SORN a car. Just because it has a MOT, doesn’t mean you are obliged to re-MOT or tax it.

As for taking said basket case when you are worried about the cost of a MOT, to tracks “around the world”, thats a bit deluded to say the least.

tracks around the world being a more long term plan rather than short term. first things first i just wanna get the car. i dont mind really if its an NB but i would prefer an NA if at all available. But i do very appreciate the advice

It’s good you have an ambition to do lots of track work, I wish I had when I was younger. Best time to do it when you are young and free.
The UK and Europe tracks are easily doable by car if you can afford the travel and entry fee. Nurburgring is still on my list at age 48!

I think what the advice is, is be careful with NAs, they tend to be either concours quality or basketcases.
You could end up spending loads of time and money on welding and painting.
It would be better to save up and get an NB for maybe £2500-3k. It won’t need to welding, so you can spend your money on engine and suspension mods for the track.
Is it insurance that is forcing you to NA?

Maybe build some NCB on an ordinary car then look at MX-5s.

Also NAs are pretty slow on a track unless you heavily mod them.

Do you need that expense through University, maybe get Uni out of the way then buy something better when you have a job?

im getting a part timer and doing a bit of volunteering over the summer to get more experience and gain some extra income and due to where i live and study, ive been considering going to MX5Parts and seeing if they have any positions on offer due it only being a couple minutes up the road. Even if they dont, the extra experience will definitely be able to aid me in getting a part timer during the uni year.

Regarding insurance, the reason i want an NA is not so much being limited to them by insurance but i just prefer them as a car. they aren’t as good as an NB when it comes down to performance but theres a certain charm that they have with their pop up headlights and slightly more aesthetically appealing dashboard and centre console compared to the NB imo. On top of that is seemingly the cheapest to insure out of the bunch. the cheapest quote i got so far was 2.9k a year which is quite alot but if i pay monthly which costs a bit more but the monthly installments of ~£255 with a stable income coming from a part time job isnt too much and with some no claims bonus would get even cheaper sooner than later. I have some ambitious plans when it comes to modification but those arent gonna be immediate due to the cost of parts and labour, the big one being namely an engine swap (probably an ecotec swap due to the amount of kits and documented guides on how to do so).

NB or NA, it wont be fully track ready for another few years minimum but i think its good to get my foot in the door and get my hands on one sooner if i can afford it. You cant learn much about a specific car and modifying it with only theoretical knowledge. it may make sense on paper but it doesnt take into account the majority of the real world variables that affect everything surrounding the car so my mentality is that the sooner i can get one and actual start getting hands on the better but i have to take into account costs. Worst case scenario, i have it SORN’d so i can still maintain and get familiarised with the car but not be having to worry about paying MOT or Roadtax or even really fuel for the time its off the road.

Look at plenty, don’t buy the first one, unless it’s excellent. Get your inspection torch out and get tapping the underside, also read the MoT history for clues to rust repairs.

Personally " I like the cut of your jib" as the old saying goes.
You come across as pretty pragmatic in the subject.
At 18 in 1970 I was pissing up the wall of the world going nowhere…having a ball but nowt to show for it the next morning.
My personal advice is get the best ( most solid as possible…(cough) Mk1 you can but be aware…spares are not as easily sourced these days as 10 years back.
One of my trusted sources ( over last 15 years) well known in the OC Forum does not see MK1 strippable sheds any longer. Most of his stock are “new” old bits.
Good luck, keep us posted.

Check this out Black NB For Spares or Expensive Repair

I have a friend who has 2 silver mk2, he mentioned a month or so ago about maybe selling them so I’ll contact him, see if he is still planning to and then I’ll let you know if he does

How much is he selling them for roughly and what condition are they in? im assuming some surface rust, maybe some corrosion around the wheel arches and door sills since those seem to be the most common problem on older model MX-5s

I pm’d you the address to his Facebook, yeah one has some rust on the arches but by the looks or it previously had sills done, overall from what I remember not too bad compared to a lot out there, other one I’m not too sure but I believe the arch rust is worse.
Just asked for price and he said 400 and you can take it today if you want

Hi Ethan, We have a 2000 (W) MX5 “icon”. Maroon with ivory leather interior. It has failed MoT and the costs of putting it right are more than we want to pay given the age of the car. Mileage is very low for the year - just north of 37000 - and the car still looks very good. As others have pointed out, there is some rust on the underside and we would of course share with you the estimate for the repairs so you would know what you are facing. My wife has owned the car from new and is heartbroken to think of it being scrapped. She would be delighted if it found a new home with someone who will take care of it.

Regarding practicalities, we are in Cheshire and, price-wise we would fit within your criteria. Let us know if this is of any interest.

Would you be able to DM me some pictures? I’d love to see the car, especially given what you’ve told me so far about the car.

The car is still in the garage so it will probably be Tuesday before I can get you pics. In the meantime I am attaching details of the remedial work that has been identified. You will note that rust is referred to. 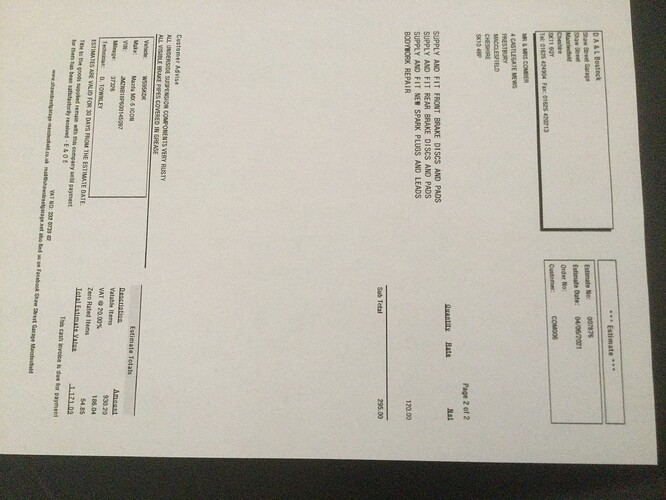 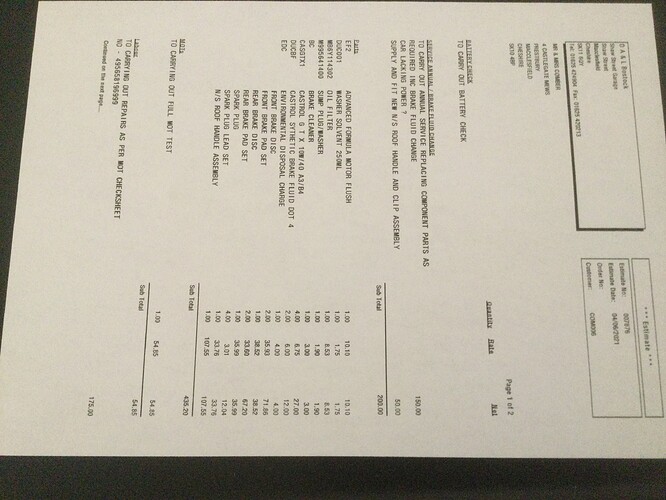