I am sat here looking at posts where people ask for comments and observations about their cars and just wondered if there were others that refrain, as I do, from making honest observations so as not to be ‘controversial’ or ‘rude’.
I have seen some modifications that are absolutely horrendous but I note that only positive comments seem to emerge. Is it a British trait or am I alone in biting my tongue?
I appreciate beauty is in the eye of the beholder but some of the modifications people do should surely be classed as a crime against ‘good taste’. The phrase ‘should have gone to specsavers’ does seem to apply in many cases but politeness seems to always save the day.
Something more important has just come up so I will stop here, my tea is nearly ready. This lock down thing must be really getting to me as I am not normally so grumpy!!!

Agree with you there Malc. Some of the mods seen on here are pretty dire, and even though I feel so, I don’t think it is correct to make negative comments about somebodies pride and joy. I also think that Mazda’s “gram strategy” thinking for the MX5 goes out the window when you look at the amount of tat that is thrown at, or added to some cars.

I feel the same, there are times when I have to “bite my tongue”, although I think most people by now realise that I am anti chrome bling and noisy “just for the sake of it” exhausts.

I just accept gratefully our not being in Teheran, NK, or Beijing etc and free to exercise freedom of choice & self expression.
To a degree anyway.
But…some things I’ve seen in numerous forums over many years are ( my opinion) cack…but it’s their cack.

This thread is worthless unless some are prepared to put their money where their mouth is. And also be prepared to take critique.

Well put, we mustn’t lose sight of ‘freedom’ . Each to their own and pleasure can be gained in many ways and it would be a bad place if that was taken away. After all most is just opinion

Some people shouldn’t have nice things. Im middle of the road, I don’t necessarily make negative comments out of the blue, but if the post asks ‘what do people think’ it’s no holds bared. Don’t want to hear it? Then don’t ask!

I hate some of the cheap chav cars on here and on the roads, they cheapen the brand. All MX5s then get painted with the same low quality brush. I had a GBS Zero and recently sold it because of the same issue. Mine was lovely looking and of high quality. It was true to the Lotus original design and showed the marque in a positive light. When going to GBS kit shows however

I mean seriously, ■■■ is wrong with some people’s standards? The owner of GBS was talking to me at one open day at the factory and they are considering selling factory built cars only going forward because, in his own words, ‘it makes my skin crawl looking at some of the scrap metal some people put out logo on’.

I am really struggling to recall the “cheap chav cars” featured on this forum that posters are alluding to. There aren’t any, unless you are talking about my car.

In fairness I see most chav cars on the roads. We have all seen the MK1 and Mk2 cars with bits bolted all over them and big exhausts. There’s a turbo charged one with pop riveted on arches around my way that is always blasting around looking ■■■■. He always overtakes me if I’m in mine as if he thinks his is better

. I would scrap it for parts and some parts I would consign to the tat straight away. I can’t say I can think of one on here off the top of my head truth be told.

Not talking about your car saz9961, but one in particular comes to mind. I hated the modifications but I am not prepared to comment about it or single it out. The owner is/was obviously very proud of it. If I like the modifications I say so. If not, I say nothing. When I have made “negative observations” in the past I have been censored by you know who.

What? Censor or modded care owner?

A point for each…a bonus point for upsetting them🤣

Mmmm! Couldn’t possibly do that. It would probably be censored anyway! Stop stirring it

As soon as I spotted this thread I had to go look at “what have you done to your Mx5 today” to see what may have sparked this lol … is it me ?

I have VERY rarely looked at the “What have you done to your MX5 today thread” because I value my tongue (see earlier post).

This thread is worthless unless some are prepared to put their money where their mouth is. And also be prepared to take critique.

Surely it’s better just to generalise on the TYPE of mod that you personally dislike, as I have done, rather than single out individual car(s) and thus their owners for criticism, in that way comments remain impersonal and non-inflammatory.

Not talking about your car saz9961, but one in particular comes to mind. I hated the modifications but I am not prepared to comment about it or single it out. The owner is/was obviously very proud of it. If I like the modifications I say so. If not, I say nothing. When I have made “negative observations” in the past I have been censored by you know who.

I have a noisy exhaust. I also have a fender stripe, and home made modifications to the interior, which has resuted in a loss of factory-designed storage space. Also a sticker on the rear bumper. And let some bloke scribble/add graffiti on my bonnet. I fitted option seats from a 1.6 to a 1.8, and have consequently lost the seat rail fitted seatbelt latches. I have replaced the factory mirrors with a set of stainless steel mirrors that are unquestionably worse than the originals. I have an intake system that means I can no longer use the factory bonnet prop. I have modified the car, and, by some measure, made the car worse than originally intended.

This thread reminds me of the Barryboys forum, which seemed to be a forum set up for people to moan about strangers cars. While there are obvious howlers around, it crossed te boundary many many times. My old 91 was a victim, after it was spotted at Trax 2004, sporting a set of stripes and a Team Voodoo Pollo Rampante. The thead survives, but not the photos

The Barried MX5 in question 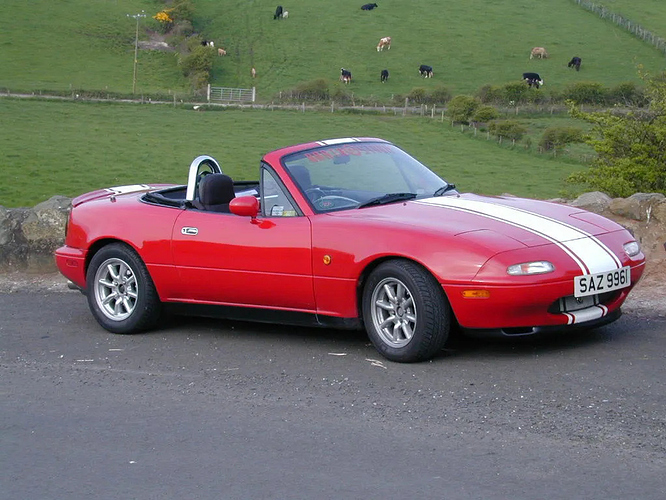 And in its Silverstone “livery” (some of stripes had fell off). You might even see the Rover Metro bonnet scoop repurposed for the cold intake, how very Barry. 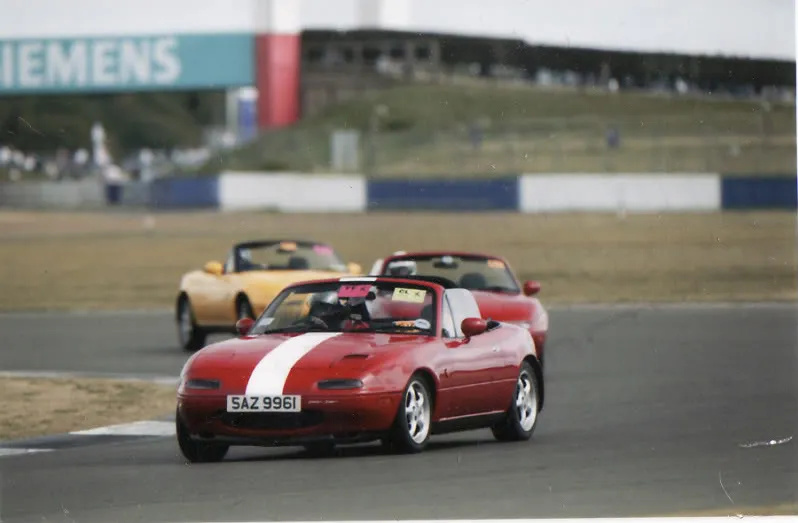