To preface the post - since Wednesday my cooling fan has been coming in after I’ve stopped driving. I assumed it was alright as it’s typical for a general car (never happened before with my MX5 but you never know). I only did a couple of miles on Thursday, then on Friday after about 9 miles from home my coolant exploded all over my engine. I topped it up but it still wouldn’t drive without overheating so I got a tow home (I bled the system in the ways I found online). I took it out again today and it did about 3 miles before the temperature started to climb all that way to the top. The expansion tank and cap both appear to be in alright condition so I was wondering if there was anything else that could’ve gone wrong?

The other thing is that (in the picture attached) the top (circled) pipe gets hot whilst the pipe below stays cold and was wondering if this was okay or this could be something to do with the problem? 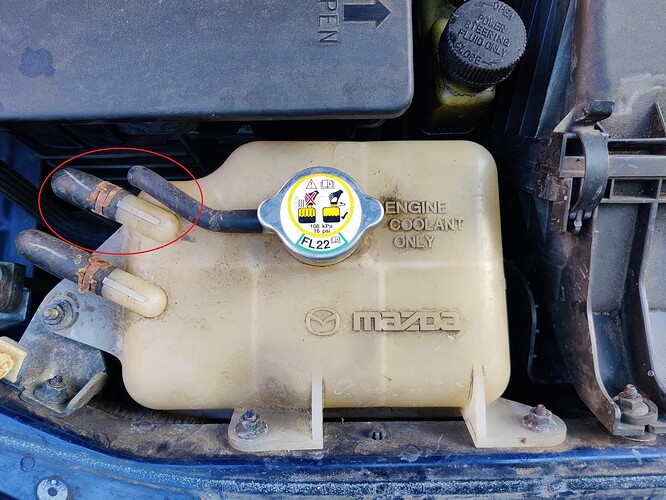 Thanks for any replies anybody can give.

Edit: does anybody know anything about ERA thermostats as there’s nothing obvious online about them but I can get one tomorrow if they’re good.

Edit: it has been solved! The thermostat went, I put in a new one today and the car is running at normal temps again. I put the solution as the link on how to change your thermostat in case this ever happens to anybody else. (As it doesn’t mention in the guide, my thermostat had 7mm bolts so you’ll need a 7mm and 8mm to get everything off)

My best guess is that your thermostat is stuck in the shut position.

That’s what I was thinking, just needed a second opinion and any other ideas before putting a new one on (as it’s so bloody inaccessible!)

I would check the temperatures of the top and bottom hoses to check that one gets hot but the other stays cool just for some confirmation.
It could of course be an airlock but you appear to have ruled that out.

By top and bottom hoses are you talking about the ones off the expansion tank or somewhere else?

The big ones that are attached to the top and bottom of the radiator. I am not sure how much room there is to get your hand in to feel these safely so take extra car and turn the engine off if you perceive any danger of finger/hand amputation.

Alright, excellent, thank you! I’ll have a look tomorrow. Again, thanks for all the help!

You could remove the thermostat completely and see what happens. The thermostat remains shut until it gets hot enough to open so without it you won’t overheat as long as the rest of the system is ok. If you still overheat, your problem is elsewhere.

I don’t think that works on the NC. The thermostat is integral with the housing and would need some re work to remove it. Are you sure that the expansion tank is holding the pressure? Where did the water / steam appear from? 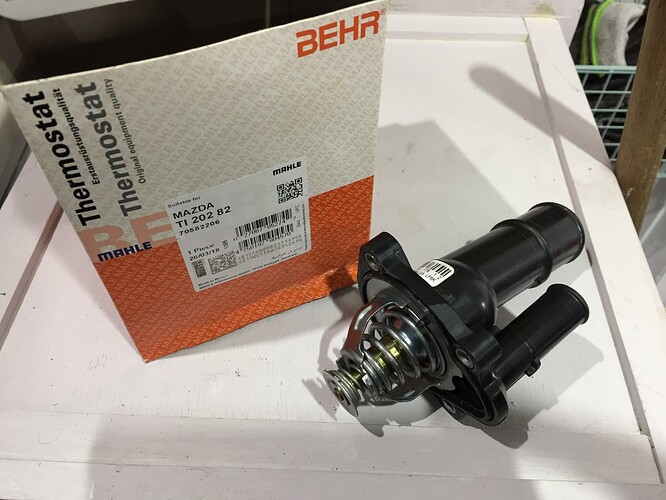 Holy moly, that is one complicated procedure. What was up with sticking the thermostat next to the radiator cap like they did when I was a lad.

3 hours hunched over the engine bay would put me out of action for the following week.

I was thinking exactly the same. In the old days the thermostat was an inexpensive little thing that looked like a toy gyroscope and, as you say, fitted in the hose where it entered the top of the rad. It took literally minutes to change with very basic tools.

I remember a few years ago a mechanic telling me it was going to take a couple of hours to change the one in my Mondeo because it was buried in the bowels of the engine bay. And the unit itself was fifty quid or so. That’s ‘progress’ folks!

But if the cap is 14 years old it might be a cheap option to eliminate this as the problem. The system will boil if there’s no pressure. It might be a hose fitting that only starts blowing when the pressure builds up. Difficult to see unless you run the car stationary until it heats up. Or a tiny hole in the rad?

Next cheapest fix might be back flushing the rad.

Next cheapest is the thermostat. As others have said, why on earth is it so inaccessible and costly to do? In my experience though they are more likely to jam open than shut.

I would be taking mine to my friendly local independent who I know doesn’t rip me off. He could get it up on the ramps and test it running.

It’s one of those jobs you’d rather not do due to the time consuming dismantling and draining the coolant etc. In reality it’s not that bad, it’s as said dismantling the hoses to the throttle body and removal of the throttle body, pretty straightforward.
It’s fiddly to actually remove the thermostat housing, the bolts mainly, well the one you can hardly see actually. You need one of those small size socket sets, 8mm if I remember is the socket size on a long extension for the hard to reach bolt. The nervy part is don’t drop the bolt(s) you’ll spend some time trying to retrieve them. I managed ok, no lost bolts.
Another time consuming part, or can be is burping the air out of the system, I had trouble but putting the car nose up on ramps finally worked to release the air.
Without any hitches, easily done in around 2 hours

Would I attempt a stat change again, well yes but i know what needs to be done of course second time around.

BTW the stats can be had from around £13 on your favourite auction site, I went for the Mahle one, a seller has these on there at a reasonable price. 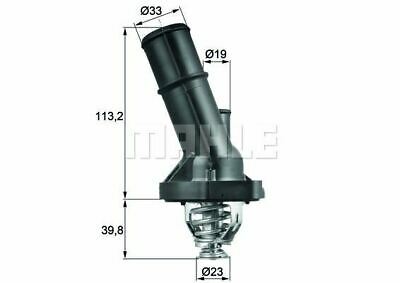 The trend for connecting rods, however, is toward ever lighter components. The MAHLE connecting rods product range accommodates this challenge. MAHLE manufactures intake and exhaust valves in forged and hot-extruded versions in a multitude of... 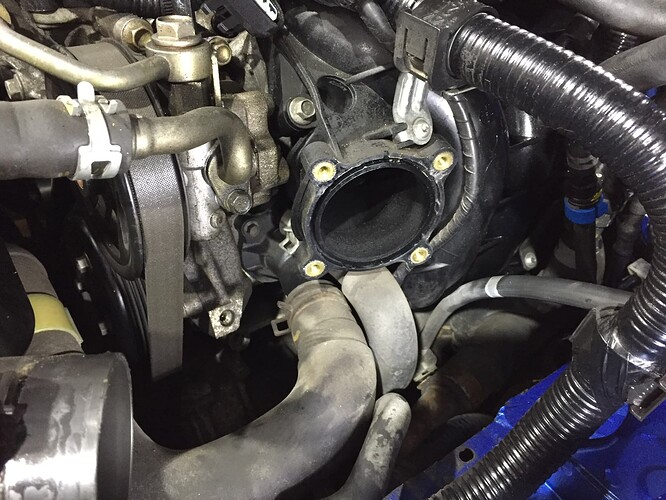 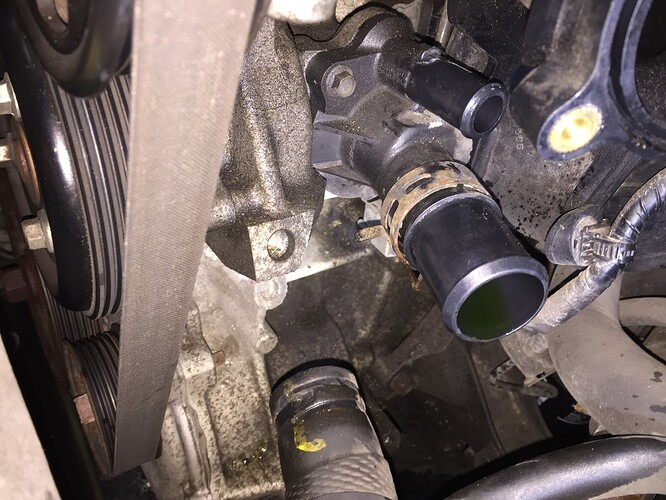 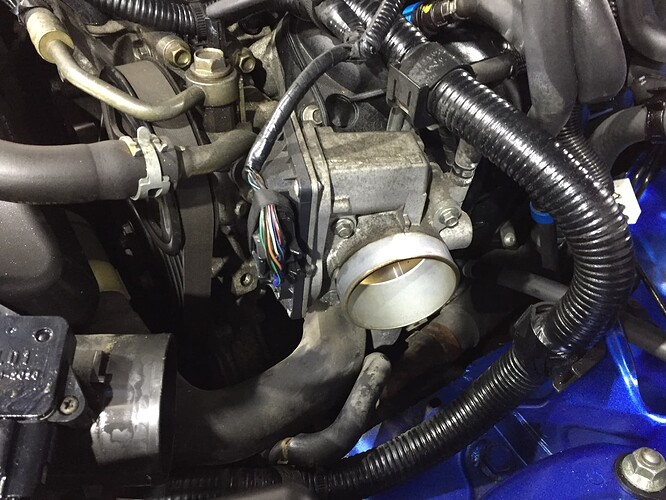 Did mine the stat had been leaking on the bottom bolt causing it to shear…now thats a job trying to sort that out, my local garage still talks/moans about it 2 years later.

Took me all day yesterday to get it out, now putting a new one in! Did half of it with just an 8mm spanner which was not fun! So much has to come it, just awful design really!

When it’s all done how far up the temperature gauge is normal? My 2012 plate is just below half way when hot.

Here I changed mine , showing some of the tools I used for trickier parts