I have finally got round to installing the hard dog deuce (top braced) I bought just before I had ever heard of Covid-19! However, despite the fact that it is supposed to work with a glass rear window (and I’ve seen youtube videos and photos, etc of it working) mine is badly fouling on my rear window and there’s absolutely no room for play (even with the bottom of the window hard up agains the rain rail) there still isn’t enough room to get the window up or down (even though I think there is technically enough space to lie it flat between) the angled rear braces). Photos below.

I don’t suppose if anyone knows if there’s a trick I’m missing?

I’m wondering if my late model NBFL (2005 mohair, glass rear window) has a larger rear window or something? I went round the forecourt of Doctor MX5 with my tape measure and everyone else’s seemed to be smaller (but I couldn’t work out if the others were original or aftermarket)! Mine also has a massive 1cm lip of something hard (either glass or metal) inside the fabric, the other side of the rubber seal. Mine is definately original (with a rubber bonded window and it still has the sticker of the original dealership on it).

Can anyone please tell me if they have a roof with a glass window that’s proven to work with this particular Hard Dog (and if so, what year if it’s original, or who you used if it’s aftermarket)?

Many thanks as always! 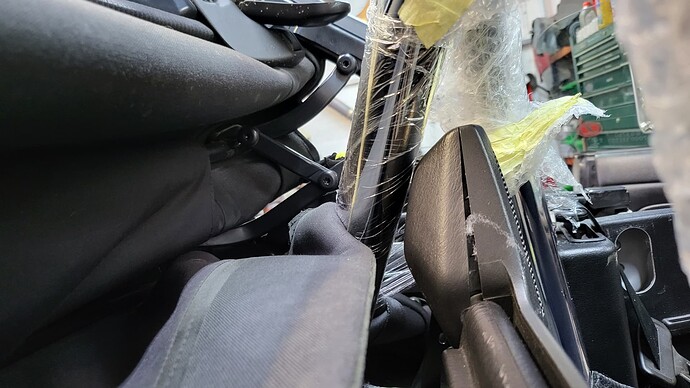 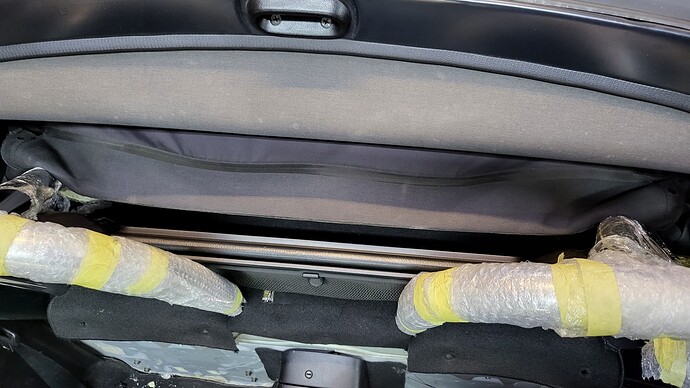 Hi Dav1, Do you still have the rear wind deflector fitted?
had to take the wind deflector out of my mk2.5 to fit hoops, a) because of the same problem you are finding and b) because the hoops fitted to the deflector fixing screw holes.

Bethania do say its not compatible with the factory wind block. All NBs/NB-FL, as original, had the same size glass window.

The Deuce, Hard Dog's double hoop roll bar, has styling reminiscent of the AC Cobra and other vintage marques from the golden era of sports car racing.

Frequently asked questions on selecting a roll bar for your Miata MX5.

Yes, but the wind deflector has been refitted as an afterthought and doesn’t affect the window problem: the hoops are in the correct place as per their instructions and design. The wind deflector has then been modified with the brackets slightly changed (a small bit had to be chopped off) and refitted slightly further back on new mounting points at a more vertical angle between the bars and the braces. There is just enough space to wiggle it in and out like this and it doesnt affect the window clearance because of the new “straight up” vertical angle…

The fouling is occurring on the brace bars which are exactly where they are supposed to be. This has nothing to do with the wind blocker.

The scheme shows that with the hard dog deuce with top bracing (not side bracing) you can keep the wind deflector and just move it back slightly. This works for both the standard deflector and the sound bar. If you use the latter the flap will go up and down as the flap is narrower than the gap between the brace bars. I think you’d have to keep the flap permanently up with a standard deflector.

I make it sound as if I’ve done the work, actually Julian and Anthony and Doctor MX5 have been putting in the spanner time and deserve the credit, I just worked out how I wanted it and they made it happen!

Bethania do say its not compatible with the factory wind block. All NBs/NB-FL, as original, had the same size glass window.

As I say, I think the wind blocker is a red herring here. Re: the window sizes, Are you sure? Mine is massive: the solid part (which extends around 1cm into the fabric in all directions beyond the bonded seal) measures 405mm H x 870mm W on mine. Looking at it and photos of other NBs online it looks physically bigger (and I can’t see how this bar could ever work with a glass window if they are all this size)…

I have a 2005 NBFL, if you take a picture of your rear window with the hood up and take some measurements I’m happy to go to the garage and measure mine if it helps?

All this talk and questions without a picture of the window??

If it has a metal rim on the outside it is original,(they are pressed in) anything else is aftermarket and could be any size

I have a 2005 NBFL, if you take a picture of your rear window with the hood up and take some measurements I’m happy to go to the garage and measure mine if it helps?

Thanks Carl. That’s really kind. We should, in theory, have the same roof with the same window then!

The window (including rubber surround) is 405mm H and 850mm wide at the widest point on mine, but there is another 10mm either side of theft and right (not top and bottom as I previously said) of either glass or metal frame within the fabric making a total width of the slab that needs to get past the uprights of 870mm 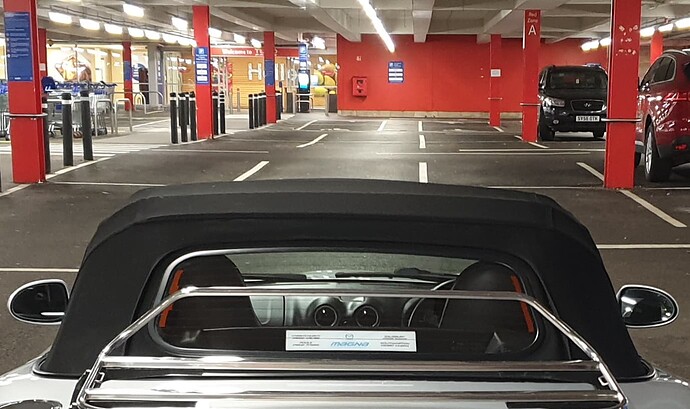 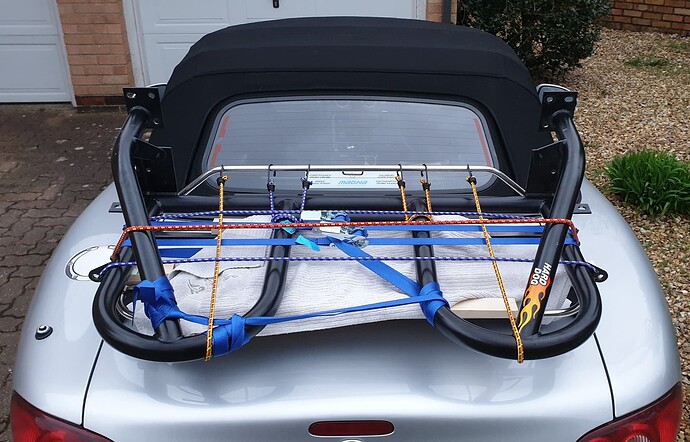 Mine looks the similar, but including the rubber surround measures 370mm high x 865mm wide (measured twice). There’s nothing else either side under the fabric, I can fold the fabric over immediately next to the seams.
Pretty sure mine’s factory fitted as the car was mollycoddled all it’s life in a garage and only had 19k miles when I got it. (plus no records of hood receipts)

So mine is slightly wider but not as tall as yours. Interestingly I have a similar type of bar waiting to go into my car!

I’m near certain mine is factory as well as it still has the Magna Mazda sticker and I have their original invoice if sale from 2005 in the paperwork. Mine is definitely taller (measured 3 times), but your height is about what I’ve seen on other mk2s in the car park (including those with aftermarket hoods) at Doctor MX5. And although my window is slightly narrower, the excess under the fabric makes what I’m trying to lie down between the brace bars wider!

Thank you so much for checking. I think I can see now why I’m having the problem. If you find yourself near the car again and it’s not too cheeky for me to ask, could I please ask if you could measure how tall the fabric strip is under your window (so bottom of glass to rain rail)?

Thanks so much and good luck with your TR lane install. The bars are quite a bit thinner in yours and so I don’t think you’ll have anywhere near the same problems.

Thanks so much and good luck with your TR lane install. The bars are quite a bit thinner in yours and so I don’t think you’ll have anywhere near the same problems.

Yes HardDog roll bars are nicely made, I had one many years ago on a supercharged mk2 before the import duties got too high to import them, hence I went for the TR Lane one. This one seems very solid and I also had a TRLane bar on my last mk1 which I was very pleased with.
If the TRLane bar is more likely to fit your hood I’m open to the idea of swapping if you like?

could I please ask if you could measure how tall the fabric strip is under your window (so bottom of glass to rain rail)?

Same windows, its the style bar at fault.
M-m

Same windows, its the style bar at fault.
M-m

I don’t think so, his window is 35mm taller than mine (on the same age car) so it’s probably the hood that’s different.

Then its an aftermarket hood bud.
M-m

An aftermarket hood that’s been crimped in and sealed properly with a rubber seal and that has the sticker of the dealer that sold the car from new on it? To me that seems rather unlikely? It’s definitely a different size though…

I’ve got a photo of the bar going in from the fitters - it looks correctly situated to me, but does anyone with better experience than me of such things notice anything off? 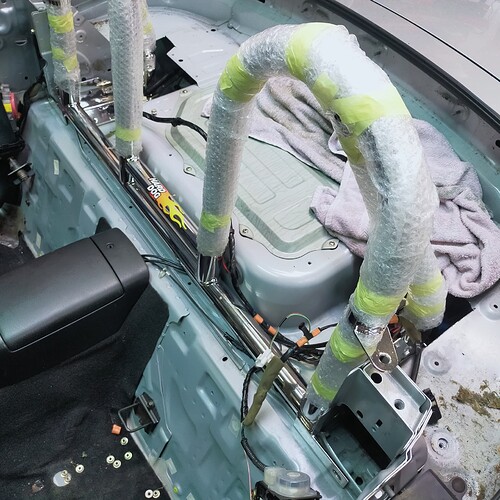 Also, with the roof up (and latched to the windscreen) the roof looks like it is resting the tops of the hoops and they are pushing through the fabric a bit - is that how hard dog deuces fit or is that indicative of another issue?

I have some more pics now from the garage - anyone got any ideas at all? I can’t for the life of me work out what has gone wrong as it should all fit… 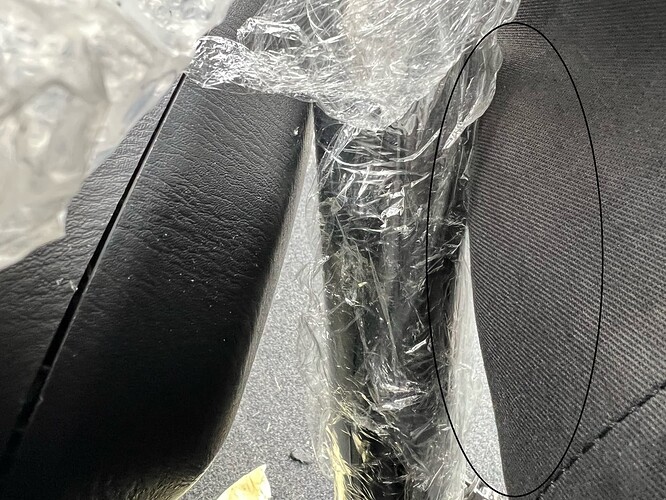 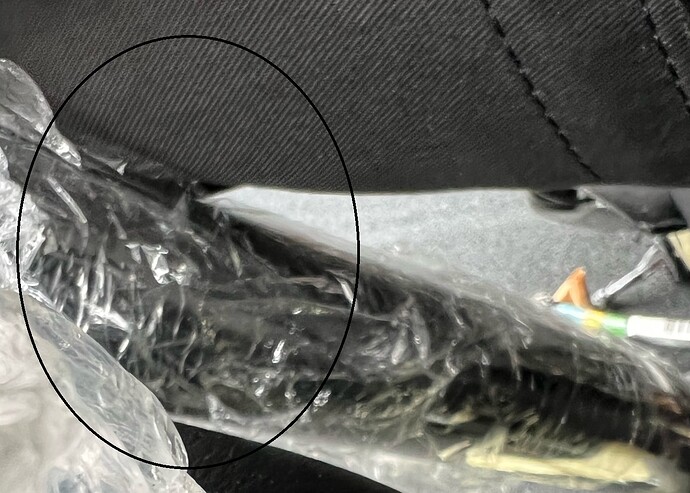 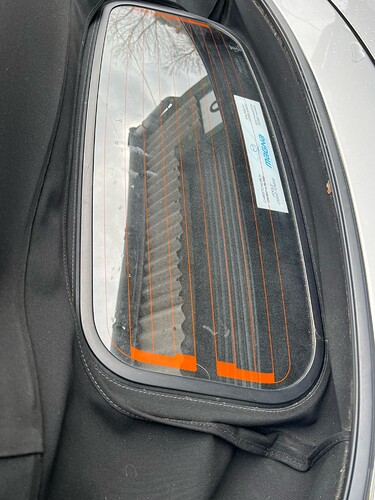 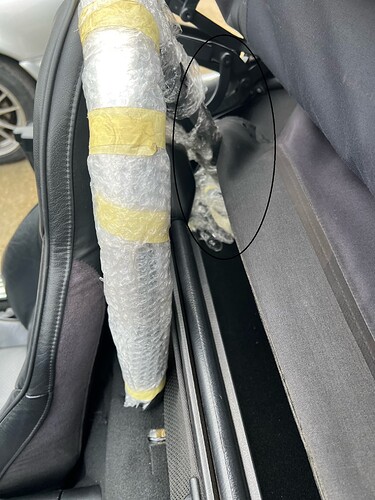 That’s a Jack Smith hood, not OEM…That is your problem. There is no stitching like that on a OEM hood. He stitches a secondhand window into his hoods. Probably in the wrong place!!

Just to say, thanks a million to Richardn - you were bang on right. I just took my car to Allhoods in Romford and they confirmed the problem is that it’s a jack Smith hood that reused the original window with bonding and took some original fabric around the window which the new roof was stitched to creating a double thickness bonding (original plus new) around the window and thus making the solid part of my window that needed to fit between the brace bars (flex point to flex point) too wide. They are going to test one of their windows (which are slightly smaller than the genuine mazda flex-point-to-flex-point as they stitch in rather than bond) and if that’s still too snug they are going to make me one using an MG F window instead.

On the plus side the bars have been fitted correctly and they will work with my sound bar on it’s new mounting brackets, and I’m getting a new burgundy twillfast mohair roof so I’m happy…but poorer!